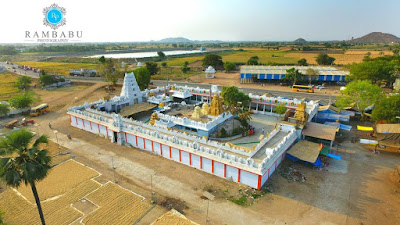 Ellandakunta is from 3 KM distrance from Jammikunta. It is 65 Kms to the south-east of Karimnagar. The place is very popular because of the existence of Sri Rama Temple. It can be reached from Huzurabad and Jammikunta railway station. Reportedly the village appears to have received its name because of the existence of a Kunta (tank) beside the temple with two big trees locally called Illendu trees. The Kunta with Illendu trees was called Illendukunta now known as Illenthakunta (Iluvenda Kunta). Illuvenda is a kind of tree.
Though no older inscriptions are noticed, there are label inscriptions of Telugu in late characters. The inscription in the Mandapa of the temple containing only Srimukha, Magha Bahula Tadiya Guruvaramu records the construction of the mandapa of the yagasala (for performingrituals in the temple) by certain Lakshmi Nancharu, sister of Bogam Balaraya. There are two more label inscriptions inlate characters. One votive label of four lines on a stone in front of the garbhagriha records the worship by certain Muttamma wife of Virappa son of Sita Yallappa. Another label inscription of three lines in the Mukhamandapa records the worship by certain Guda Pariki on Jyeshtha Suddha Panchami. Ramalayam Garuda Stambha Sri Rama Temple This is known as Sita Ramachandra Swamy Temple. This temple faces the west. When one enters the temple from the maindoorway on the east, he finds the rear part of garbhagriha. The figures of Sita, Rama, Lakshmana and Ranganayaka swamy carved on a big boulder are noticed in the garbhagriha. The figures of Alvars are also carved at the base of the boulder. In front of the garbhagriha there is a sixteen pillared mandapa followed by another sixteen pillared mandapa. The height of these both the mandapas is not more than six feet. Many mandapas are seen in the temple built in different times for the comfort and convenience of the devotees visiting this place. A sixteen pillared mandapa lying to the north of the temple is converted into a safe hall by raising walls all around for the needs of the temple. There is another sixteen pillared mandapa before this converted hall. To the south of the temple there are two more sixteen pillared mandapas one before the other besides a twelve pillared mandapa. Thus many mandapas are noticed in the temple premises. Curiously enough the main door way on the east contains Mithuna sculptures and a figure of Lajja Gauri a primitive Mother Goddess with legs wide apart showing prominently the genital part.
The old sculpture of two handed Vinayaka with real elephant head with out a crown is noticed in the Ramalingesvara temple lying on the west within the same courtyard. The sculpture of Virabhadra with four hands and two more beautiful sculptures of Vaishnavite Dvarapalas five feet in height with four hands are found in the courtyard of the temple. There is another door in the north to get entry into the temple. Near this doorway there is a Garuda Stambha with a miniature mandapa at its top containing the sculpture of Garuda. To the west of the temple is the village tank and behind this tank there is a beautiful Koneru or holytank of the temple. It is learnt that the marriage of the late Prime Minister P.V.Narasimha Raowas performed in this Sri Rama Temple. 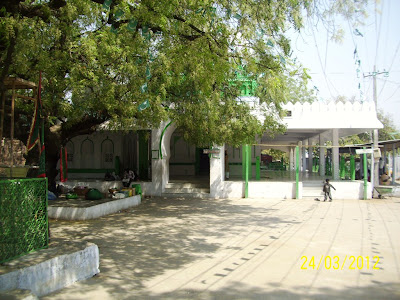 Bijigiri Shareef in Jammikunta Mandal is a railway station lying about 62 kms to the east of Karimnagar. It is about 22 kms from Huzurabad and 6 kms from Jammikunta Station. This village is a prehistoric site containing Megalithic burials. Once the name of the village was Vijayagiri which is now called Bijigiriconsisting of giris or the hills and hillocks in its surroundings. There are steps to reach the old Narasimha temple and Hanuman temple lying on a nearby hill. Bijigiri Dargah Today the village Bijigiri Shareef is very popular because of the existence of the Dargah of Hazarah Inkeshah wali Rahamatullah Ali worshipped by both the Muslims and Hindus alike with great reverence. There are four beautiful gateways on four sides of this tomb. The big dome on the tomb is a splendid attraction of this beautiful edifice. The tomb of Azmatshah Wali brother of Inkeshah Wali and the tombs of their sons MurtazashahWali and Akbarshah Wali are also noticed in the same premises. The tomb of Hazrat Syad Afzal Bi wife of the holy saint InkeshahWali is very near to the main Dargah. The peaceful atmosphere and the beautiful naturalsurroundings of this place tend to the growth of pure and serenethoughts of spiritualism. This holy Dargah with four gateways in the shape of arches surrounded by hills and hillocks filled with thousands of pigeons found in large groups attract the devotees from various places. On the occasion of the annualUrs (holy congregation) celebrated in connection with the Muslim festival Bakrid, thousands of people from far off place participate in it to offer their prayers in the Dargah. This Dargah stands as a symbol of communal harmony as the Hindu visitors are found in large numbers. It is reported that this Dargah is eight centuries old.

Kothakonda in Bheemdevarpalli Mandal lying to the south-east of Karimnagar near Mulkanuru can be reached by bus either from Huzurabad or Husnabad. This place surrounded by hills is known for the temple dedicated to Virabhadra Swamy. The tradition reveals that Kora-Meesala Virabhadra Swamy i.e. the Lord with moustache is known to have been installed by Kedara Pandita during the period of the Kakatiyas. Virabhadra Temple Virabhadra Swamy The lord installed on the hill of Kothakonda is said to have been brought down and reinstalled at the foothill in a temple built on the ground for the convenience of the devotees visiting this place in large numbers. The Jatra or the temple festival ceremonised every year for ten days in connection with Makara Sankranti attracts over one lakh devotees from the surrounding places. On a hillock of this place, there are ruins of a big fort with huge gateways bearing beautiful architecture resemblingthat of Kakatiyas. There are five ponds on the top of a spacious hill. Among these two are reported to contain water even under severe drought conditions

Odela the headquarters of a Mandal lies to the east of Karimnagar near Sultanabad on the railway line of Kazipet- Balharsha section of south central railway. The place is popularly known for Mallanna or Mallikarjuna temple. The deity in the form of Siva is worshipped mainly by the Gollas and Kurumas besides other sections of the society. On the ruins of the old temple the present temple is totally rebuilt with a beautiful Sikhara on the garbhagriha and a high gopuram at the entrance. As found in Raja Rajesvara temple of Vemulavada, the tradition of presenting cows and calves to the deity by the devotees to fulfil their vows is prevalent here also. The rituals of keshakhandanamu or tonsure ceremony are also performed here. Mallanna Temple Front view Mallanna Temple Back view The temple fair is performed here in connection with Mahasivaratri festival. The ritual of taking out prabhas, storytelling by oggu-kathakas and a large number of decorated bullock-carts for the races are the chief attractions of the temple festival. The income of the temple runs into lakhs.

Uppal in Kamalapur Mandal was once the headquarters of a Fargana with 30 villages under its control. It was an important old village because it lies on the way from Elgandal fort to Orugallu fort (via) Mulanguru fort. Uppal is a railway station today lying on Kazipet-Balharsha line. There is a Vaishnava temple probably belonging to the medieval period which presently houses lord Venkatesvara. It consists of garbhagriha, antarala and sixteen pillared mukhamandapa with a porch resting on two pillars in the front. There is a Prakara wall around the temple. Old Vaishnava temple Bastion and wall of gadi A small temple dedicated to Siva is noticed on the other side of the road leading to Kamalapur. There is a Gadi or fortalice with bastions on four corners. The lower half of the bastions and walls is built in stone while upper half is noticed in mud and brick. It belongs to the ancestors of Pendem Rangarao and his predecessor Lakshman Rao. It stands now partly ruined.

lying on the south-east borders of the district on the way to Warangal is about 50kms south-east of Karimnagar and 5 kms north-east of Elkaturthi. There is a Trikuta temple in the fields about a furlong away from the village on the way to Suraram. Reportedly the temple lies under the revenue limits of Suraram, although it is situated at the outskirts of Viranarayanapuram. There is a double storeyed mandapa with a spire in stepped pyramidal form over the entrance doorway lying before thetemple. Ruined Temple Doorway Gateway The temple facing the south contains a central mandapa with three shrines projecting to the west, north and east. Each shrine contains a garbhagriha preceded by an antarala. The temple is in a dilapidated condition. The spires over the shrines are lost. The walls of the temple contain a double shell. The inner shell is exposed while the outer shell is lost. The central part of the mukhamandapa contains ceiling in Kadalikakarana process with a full blown lotus looking down. The antarala doorways contain lattices on either side one above the other in a vertical line. This temple may be assigned to 11th and 12th centuries A.D.

Mirzampeta in Srirampur Mandal on the banks of river Maner is about 56 kms to the east of Karimnagar. It is an early historical site. Near this village while going from Mirzampet to Gumpula village about fifty to sixty megalithic burials are noticed which reveal the antiquity of this place. One Anumandla Venkataiah, while digging for a well before his house at Pochampalli, the hamlet of Mirzampet a small Buddhist stupa built in stone was unearthed in 1994. It is curious that a casket containing the relics of Buddha, which could not be found in the stupas at Dhulikatta and Pashigoan, is noticed here as reported by late M.Lakshminarayana the native of this place, who worked as a Technical Assistant and Guide Lecturer at Government museum Karimnagar for a long period. The sculptures of a four handed Devi, Bhairava and Kalimata are noticed here. Reportedly a Viragal sculpture in red sandstone holding sword and shield is stated to be of a soldier named Katamaya. The stone age tools like hand-axes, querns, rubbed stones etc noticed here reveal that it is also a prehistoric site. It is curious that a single panavatta in red sand stone containing two lingas is noticed at Kishtampet a near by village to Mirzampet.