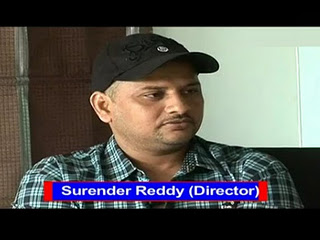 This guy wears his appearance like any other techies we see these days. He is short and looks as if he needs to lose a kilo of the bulge.
But, once he starts talking, his passion for cinema takes over. One will be surprised at the depth he shows for story-telling.
But that’s what differentiates him from the others in the highly competitive world of movies.
That’s 33 year-old Patthi Surender Reddy for you, an ear-to-ear grin beaming all over his face even as he answers a phone call on his mobile. “Sorry, but I am getting a number of calls from people about ‘Oosaravelli’,” he says, rather modestly.
‘Athanokkade’ (2005), ‘Ashok’ (2006), ‘Athithi’ (2007), ‘Kick’ (2009) and now ‘Oosaravelli’. That’ his filmography for you. The rather long gap after ‘Kick’ made people wonder why and naturally increased expectations from this youngster hailing from Machanapalli village of Jammikunta mandal in Karimnagar district.
Lauds Jr. NTR
Ask him about it and he smiles, quipping, “I got married in between on May 28, 2009.” He goes on to say how it was a pleasure working with a professional like Tarak (Junior NTR). “It was an experiment trying out a successful hero in a new genre and he liked it, trusted me and put in his best. It paid off and I am glad his trust in me was not misplaced,” he says, heaving a sigh of relief.
Different screenplay
Getting a bit technical, Surender recalls how he was confident and went ahead, incorporating an entire block of screenplay to narrate the flashback sans the hero.
“It was a risk but that’s me looking back, I am happy people have accepted that at least a third of the scenes in ‘Oosaravelli’ had a different screenplay,” he ruminates.
“A filmmaker’s journey through tinseltown has to be dynamic all the time. I agree I still don’t have the perfect formula for success, yet. I know it’s within me and it will come out in time. A little bit of everything is what my films will have,” he says, signing off, trying not to appear over-confident.