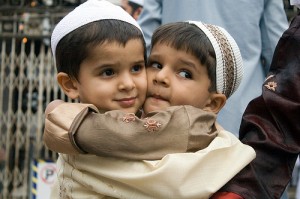 Also called Bakrid, Id-ul-Zuha, is a festival of great rejoice. Special prayers and exchange of greetings and gifts marked the Id-ul-Zuha (Bakrid), the festival of sacrifice, celebrated with traditional fervour and gaiety in India. Id-ul-Zuha is a reminder of Prophet Ibrahim’s readiness to sacrifice his son for God’s sake. It also marks the completion of Haj (pilgrimage to Mecca). On this day, special `Dua’ is recited by thousands of muslims for peace and prosperity.

Legends
It is a commemoration of Hazrat Ibrahim’s great test of obedience to Allah, who ordered him to sacrifice the person dearest to him. Ibrahim decided to sacrifice his son Ismail, at Mina, near Mecca. As the great religious leader was on the point of applying the sword to the throat of his dear son, it was revealed to him that the exercise was merely a test of his faith in Allah, and that he could sacrifice a ram instead.

Rituals
On Bakrid, the Muslims go to the mosques in the morning to offer prayers to Allah. and then sacrifice the animal at home. Bakr means ‘sheep’, and on Bakrid, the affluent sacrifice one animal per member of the family, and distribute two-thirds of the meat among the poor. A full-grown camel, cow, goat or sheep, free from any disease, is sacrificed. Bakrid is also a day for feasting and visiting friends to say Id Mubarak.